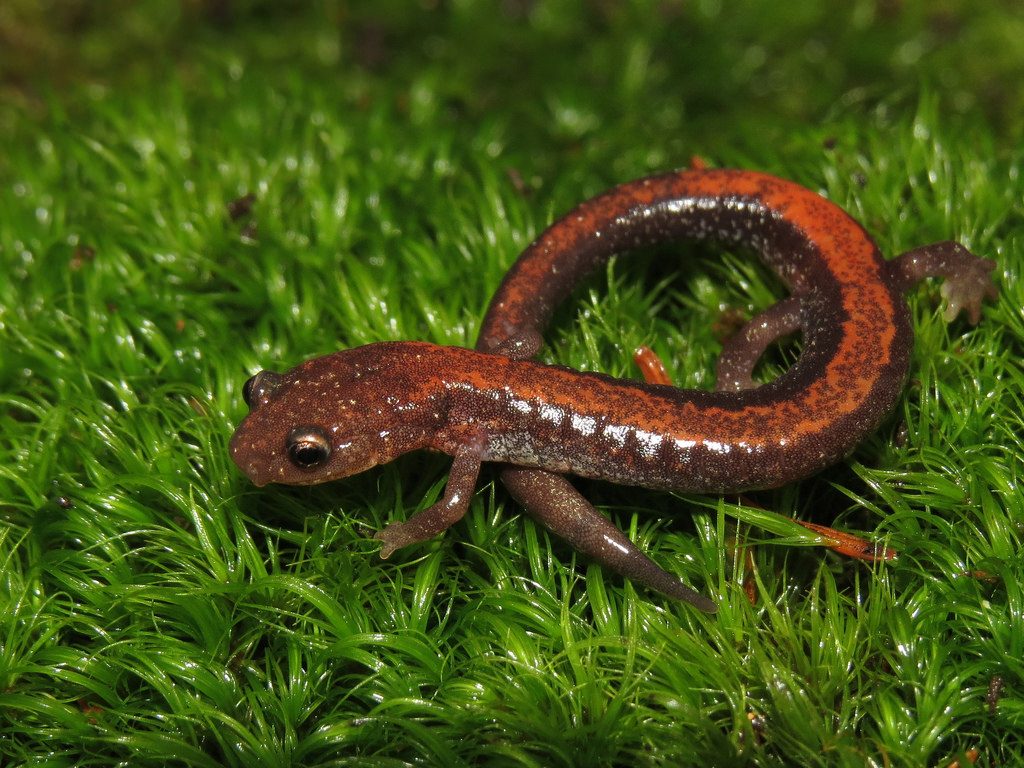 Leaf litter is a big and important part of Red-backed Salamander habitat. The loss of trees means less leaf litter. Most of the habitat loss is due to the development of forest lands for urbanization and suburbanization. Forestry also impacts their habitat. After timber harvests, local salamander populations decrease and take a long time to recover.

Salamanders respond a lot to very local habitat features, so you can make a big impact in a small area. Forest management practices can decrease their impact on red-backed salamanders by increasing coarse woody debris on the forest floor. In forested areas, retain leaf litter for natural cover to protect the salamander’s forest home. You can also use rocks and logs in landscaping.

Red backed salamanders use forest floors and actually spend a portion of their lives underground. These salamanders are also freeze intolerant, which means that they do not survive freezing events. In the winter, when these salamanders are underground, the snow acts like a buffer for the soil (think of a big white blanket on top of the soil). When there is snow on the ground, only a small portion of the top layer of soil freezes. When you remove that snow, the soil freezes deeper. Current research is studying how this may impact salamanders.

Pollution comes from urban, industrial, and agricultural runoff. Pollution can alter soil chemistry, which is particularly bad for Red-backed Salamanders because of their sensitive skin. Pollution can also kill off important prey species for salamanders, like springtails.

Reduce your use of chemicals and dispose of them properly to help reduce their flow into salamander habitat.

Not a threat for this species.

Phew! This one doesn’t yet require action. Look to the other threats for ways you can help this amphibian in need. Keep up the good work!

Invasive earthworms, introduced from Europe, have spread throughout the region, often because anglers discard the worms they don’t use as bait. These worms reduce soil moisture, which is bad for both the salamanders and the small arthropods they rely on for food.

There is little evidence that any of the three major emerging amphibian diseases (Ranavirus, Chytridiomycosis, BSal) impact Red-backed Salamander. In fact, there are studies that have demonstrated that red backed salamanders can actually fight off diseases like Chytrid!

Wash your shoes and equipment after every hike, fishing trip, or visit to wetlands. You can help reduce the spread of these deadly diseases and fungus!! Learn more here.

Intact deciduous forest, preferably mature, with leaf litter and woody debris for the salamanders to live under.

This species spends part of its time at the forest surface and then part of its time underground to deal with either hot, cold or dry conditions. It is entirely terrestrial and is active in the Spring and Fall.

It takes about two years for a salamander to become reproductively mature, and females typically lay eggs every other year across most of the range. They spend a significant portion of their lives underground. They eat anything they can fit in their mouths, but mostly they eat arthropods living in and on the soil. They are one of the most abundant and widely studied salamanders in the U.S.

Among the most interesting aspects of Red-backed Salamander natural history is that they have direct development of their offspring. This means that tiny salamanders hatch from eggs, as opposed to having an active larval form, which then metamorphoses into an adult. Because of this, red backed salamanders do not have large individual home ranges, compared to other salamanders. Another point of mystery for this species is that it is polymorphic (meaning that individuals may look different, but be the same species). The two most common forms of Red-backed Salamander are the red-stripe and lead-back forms.

SPARCnet is a great example of a network of partners coming together across the entire range of the Red-backed Salamander and using standardized methods to monitor how the species is doing.

Amphibians were graded based on their population status, occupied habitat, and vulnerability to threats. These report cards are living documents that change based on the latest amphibian expert opinion received through the Amphibian Report Card website. We rely on experts to keep the information up-to-date. If you're a species expert, share your expertise here. To learn more about how amphibians were graded, click here.

Do you have additional information to add to this report card? Become a contributing expert!
You must Register or Login to post a comment. Questions? Contact us.